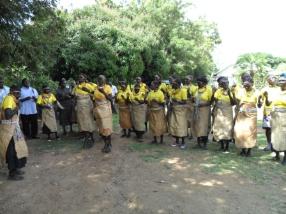 Hon. Dr. Linah Jebii Kilimo, Member of Parliament for Marakwet East and Assistant Minister for Cooperatives and Marketing, invites the Kenya Peace Ambassadors and interested parties to a Peace meeting between the Pokot and Marakwet communities in Chesegon, Kerio Valley, Marakwet East Constituency on Friday 31st August 2012 from 12 noon to 4pm.

This meeting is the last of a series of peace meetings after a member of the Marakwet Community was killed by members of the Pokot community. The murder occurred when Hon. Kilimo was out of the country, and had the potential of reversing the peace that has existed between the two communities over the last 10 years since she was elected MP for Marakwet East. We regret to say that we are currently witnessing similar retaliatory attacks in the Tana River area in which over 50 people have died, 400 injured, displacement of several people with significant loss of property – reminiscent of the spiral violence that occurred in the Kerio valley before year 2003 when Hon Kilimo became the Member of Parliament for Marakwet East.

Hon Kilimo therefore negotiated for follow up peace meetings, which were held on 22nd July when she was still in Nigeri, as well as 2nd, 7th, and 16th August. The last and final meeting in this matter is to be this Friday 31st August 2012. The peace meetings are one of the many ways in which peace building occurs on the ground. In these meetings, the people address issues of insecurity as they express their desire to continue living in peace as Alternative Dispute Resolution mechanisms are put in place to foster reconciliation. In this particular scenario, Hon Kilimo requested that the Pokot community voluntarily identify and arrest the culprits within 5 days. The aim here is that retaliation by communities is discouraged, and instead, criminal elements within the community are arrested by the citizens themselves. By 7th July, two of the four culprits were arrested; the third who gave the fatal blow was then arrested after the peace meeting with one still at large.

The meeting of Friday 31st August is therefore to discuss and give compensation to the affected family and community in appeasement, as the ordinary mwanainchi does not wish to lose the peace gained over the last 10 years. The guilty individual will meanwhile face the governmental judicial system. We believe this is an opportunity for the Kenyan Peace Ambassadors to identify with the reality that unity and cohesion in Kenya is the duty of each and every Kenyan, in keeping with the NCIC campaign dubbed Kenya Kwanza (Kenya comes first). For travel details, kindly email Bethwell Kaino on Tel 0723 838 992 or email Hon Kilimo on jebiilina2008@hotmail.com

Role of Kenya Peace Ambassadors
By the Kenya peace ambassadors attending and speaking at this meeting, they will be “Enhancing contact among ethnic and racial groups and the development of shared values, tolerance, inclusivity, trust, and the embracing of diversity among Kenyans”. Continuous contact among groups and acceptance of diversity allow for people to learn from each other across cultures and therefore reduce clan, ethnic or racial tensions and anxieties. The Kenya Ambassadors will also be “Responding to the social challenges and changes which have tended to undermine cohesion and to subvert integration”.

This is in keeping with the NCIC strategic policy framework for positive ethnic and race relations in promoting and ensuring integration, cohesion and peaceful coexistence among all communities that constitute Kenya as a nation. This is also in keeping with the Constitution of Kenya 2010, the National Cohesion and Integration Act No. 12 of 2008, Kenya Vision2030, Kenyan statutory law and international Laws as demanded by Article 2 of the Constitution of Kenya 2010. This invitation to Marakwet is also in keeping with the policy requirement that county governments and various public and private institutions and companies develop their own ethnic and race relations policies that are specific to each entity but based on these policies.

This activity is therefore assisting Kenyans in entrenching its new Constitution, proactively mitigating conflict, building peace and ensuring cohesion. Where Cohesion in Kenya refers to the processes in which national celebration of ethnic and racial diversity leads all communities to unite and collaborate in building and maintaining a common national culture that is based on shared values and principles entrenched in the Constitution.

Role of Kenya Vision 2030
With specific reference to Kenya Vision 2030, this is also in keeping with the fact that Vision 2030 can only be realized with the concomitant implementation of policies that promote positive ethnic and race relations. Section 2.2.2 of the NCIC Strategic Plan (2010-2013) recognizes the social pillar of Vision 2030 as “a basis of transformation of our society [that] aims at investing in the people of Kenya by maintaining a just and cohesive society that enjoys equitable social development in a clean and secure environment with a hope for future generations;” and the political pillar as envisioning “a democratic political system that is issue-based, people centered, results-oriented and accountable to the public…. and promotes national cohesion and integration and leadership that is highly accountable to the people of Kenya.” It is the success of these two pillars that will in turn lead to the Economic Pillar becoming a reality in Kenya, and specifically between the Pokot and Marakwet along the Kerio Valley even as they continue to trade, intermarry and peacefully co-exist.